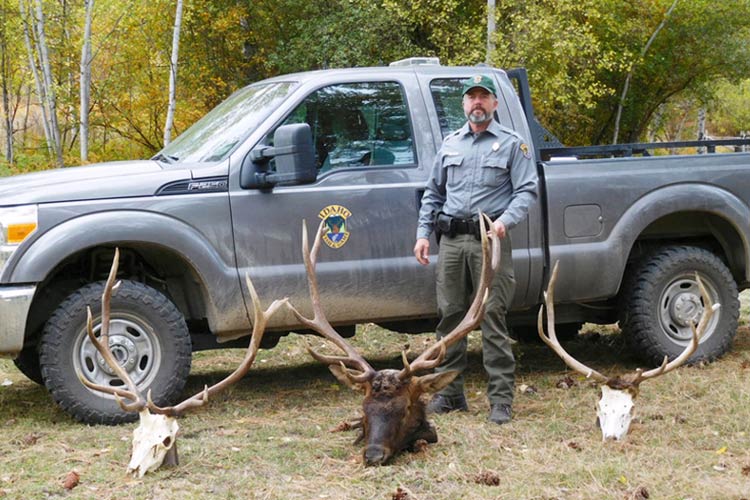 BOISE — Multiple seasons of elk poaching have caught up to two men who now face jail time, hunting license revocations and thousands of dollars in fines and restitution.

In September 2016, Jonathan Blaschka, 36, of Mountain Home and his companion Charles McCall, 41, of Mountain Home gunned down two bull elk during an archery-only season near Yellow Pine, Idaho. This, despite the fact that both men held valid archery elk tags for the area. Blaschka returned to the Yellow Pine area in September 2017 and used a rifle to poach a large bull elk and a cow elk, again during the archery-only season.

Using information obtained via the Citizens Against Poaching hotline, Fish and Game Conservation Officer Jon Hunter and a team launched an investigation that led to the seizure of a firearm, cell phone, elk antlers and elk meat stored at Blaschka’s residence. In one text message found on Blaschka’s cell phone, he boasted of shooting multiple elk, wounding another and shooting until he ran out of bullets.

×
Earlier this month, Blaschka appeared in a Valley County courtroom for formal sentencing by Judge Lamont Berecz on seven wildlife violations including two counts of poaching a bull elk, two counts of possession of an illegally-taken bull elk, poaching a cow elk, possessing an illegally-taken cow elk and using an elk tag belonging to another person.

Blaschka was sentenced to 30 days in jail — to be served during the next four months — and was ordered to pay nearly $9,000 in fines, court costs, processing fees and restitution. His hunting privileges were suspended for four years, and he also received two years of unsupervised probation.

McCall was fined $1,380 and lost his hunting privileges for one year.

Conservation Officer Hunter credits the case to a concerned, anonymous citizen who brought the suspected poaching to the attention of Fish and Game.

“With an average patrol area of over a thousand square miles, Idaho conservation officers cannot be everywhere at once,” Hunter said in a statement. “We depend on ethical hunters to be our eyes and ears in the field and encourage them to report illegal wildlife activities.” 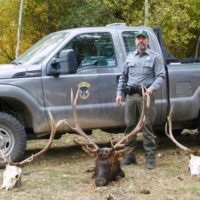